​Book review for “Rising Tide” by Sarina Dickson, published by Kōtuku Creative with Therapist notes from Julie Burgess-Manning.
This is the third book in The Worry Bug series by the Kotuku Creative group, and targets children aged 8-12 years old. It is available in English as well as in Te Reo. It is a delightful story that centres on a young ten-year-old boy (Ari) who is trying to manage some big worries. Ari lives with his parents and two sisters in a small rural town, and is having a great deal of trouble with writing, reading and spelling, which he is trying to keep a secret. The effort of trying to hide this leads him to experience physical symptoms of anxiety, negative cognitions, and feelings of shame, sadness and worry; it also results in him avoiding situations where his secret might be found out. He also avoids friends, family and his kind supportive teacher, leading to him missing out on key supports. A major event involving his beloved Koro leads to a series of events that ultimately lead to him discovering that his much-admired father and Koro also have the same difficulties, and Ari realises that sharing his problems and worries leads to him learning that they are often not as bad as he feared.

The story illustrates the five part CBT model very well, with Ari having physical, cognitive, emotional and behavioural responses to situations where his worries are triggered. His pattern of avoidance – and how it worsens the situation – is also nicely depicted, as is the loneliness of keeping his secret (and the resulting worries) to himself. The cognitive and social processes that are typical of this developmental stage are incorporated into the story in a way that I think most children this age will identify with. While the importance of family is still evident in the story, the growing desire for independence, along with an increasing awareness and emphasis of the opinions of peers that is characteristic of this age, is also included.

Rising Tide also included the therapy notes that are intended for use by teachers in schools, parents in the home, and by therapists in individual work. The therapist notes are well explained, and are designed to scaffold between home and school. They incorporate and link to competencies in the NZ curriculum so will fit in nicely with schools’ needs to demonstrate the relevance of the topics to their required teachings. The topics and tasks would be able to be delivered in a variety of settings and formats (individually as well as in groups). The activities take advantage of the cognitive and social processes of middle childhood, and mix concepts such as magical thinking with cognitive errors to create a set of tasks that will meet the needs of children across the specified age range. The emphasis for teachers and parents on managing their own emotions, and adopting and modelling the skills to children is very appropriate for this age range, and the systemic focus of identifying supports will be beneficial for all children.

The English version of the story, and the therapist notes, beautifully incorporates Maori culture, and the therapeutic notes which use the metaphor of a family Korowai (cloak) which weaves together the family values as a protective cloak is just lovely. Similarly, the idea of developing new family Kowhaiwhai builds on the idea of stories through art and that families can change their stories and commit to new ways of being.

I think this book and the resources attached to it are a wonderful addition to what we can suggest to families, schools and therapists supporting children with anxiety. If I were to offer any suggestions or constructive comments to the publishers, it would be to suggest that they highlight that the skills discussed in the therapist notes can be generalised to other emotional states, not just anxiety. When using the strategies, it would be beneficial to add in ways to encourage and teach people to calm down physical responses before they engage in cognitive strategies and accessing social supports. This is suggested in the actual story when Ari takes some deep breaths, but it would be helpful to include some specific calm breathing and relaxation techniques in the package of resources. Also, some of the language in the therapist resources is quite sophisticated – for example, ‘dominant and subjugated stories’ are terms that therapists would be very familiar with, but might be quite daunting for parents. The terms themselves are well explained; however, I would like to think that this book can be used by people with varying degrees of formal education, so I hope that some of the more ‘technical’ terms do not put people off or have them feel that they couldn’t use the strategies. Finally, the website link given on the final page of the book leads to an error message, although the resources themselves and research supporting the ideas were easy to find on The Worry Bug website, under the section “The Rising Tide”.

​In conclusion, this book beautifully sets out complex psychological processes in a way that children aged 8-12 will understand and relate to. It incorporates biculturalism and key theories relevant and supported in the literature on children and anxiety – attachment theory, systems theory, narrative therapy and CBT. It also incorporates key developmental processes (both cognitive and social) in the therapeutic strategies, along with tasks that can be tailored to individual family values and beliefs. The application to both school and home would hopefully mean that children would be receiving consistent and positive messages, modelling and strategies from the key people in their lives, and if delivered in a group format, would also involve social support from peers. I will be recommending this book to people wanting to support and assist with children with mild levels of anxiety; those with distress at a higher level would benefit from having therapist coaching of the children and their parents, in order to successfully implement the strategies for children like Ari.
Mental Health Foundation
Rising Tide
Dickson, S. (2016). Kōtuku Creative
Sarina Dickson and Julie Burgess-Manning are the pair responsible for the very popular Worry Bug resources (Maia and the Worry Bug and Wishes and Worries) brought about as support for children after the Christchurch earthquakes. However, don’t be put off if your child or students haven’t experienced, or don’t remember the earthquakes. This book appeals to any child with worries, and includes excellent strategies to help.
Rising Tide is Dickson’s new book, but for older aged children (Year 5–8). Cleverly however, Rising Tide is not Maia and The Worry Bug for older children. It’s a fresh, new story fully created on its own accord. Everything about it screams 8–12 year olds – the physical size of the book, the cover page illustration, and the use of minimal illustrations throughout.
The book centres on nearly ten-year-old Ari who lives with his parents and two sisters. The hooks come quickly – Ari has secrets. While these hold our interest in the story, it’s reassuring for us with our own, and there’s a subtle focus on Ari believing he’s the only one that suffers from his secret which keeps him feeling isolated and ashamed.
Creative lesson plans included
What captured me were the skills and strategies both Ari and his Dad use to manage and cope with things. The back of the book is filled with creative lesson plans for school use. I was impressed by the immediate connection Dickson makes between home and school and the extension of activities from interpersonal relationships to communities and environments.
A part of this focus is brought to self-fulfilling prophecies – our beliefs that we are the way we think we are, and how this relates to worry. This is of course challenged, and looks to embed a growth (rather than fixed) mind-set understanding. Because I’m not a teacher, my thoughts come from a parent perspective – do I want my children exposed to, and learning about this? Absolutely.
Useful strategies embedded
This is unmistakably a New Zealand/Aotearoa story – the use of Māori and the descriptions of what Ari notices in his rural township are so familiar. At no stage did I consider the themes in the book as having to relate to the Christchurch earthquakes. The strategies embedded in the story are useful for any young person whether they worry a lot or a little.
My daughter gave Rising Tide a solid eight out of 10. She told me it was “relatable” and that, “If I have secrets that feel really big and kinda out of control, I’d talk to someone… [like] you, nan or maybe dad.” Perfect. I couldn’t ask for anything more.
Reviewed by Anna Mowat, Family Advisor at All Right?

"I recommend this book for anyone who is struggling at home or school.  It's all about building up courage to not be afraid to show everyone who you really are. It's also a message that you shouldn't be afraid and you should just give things a go.  And if it doesn't turn out you can always try again."
Bronte, age 9

"Ari is a glum child, because he thinks that he’s not good at anything. I enjoyed this book because the characters were well written and the storyline was intriguing and I genuinely felt sad for the main character. I also enjoyed how the conclusion of the story made me feel happy for Ari. I recommend this book for readers aged 9 to 21. The story flowed well and I wanted to keep reading until the very end. I also like how it included the teaching plans and family exercises. I feel this book would be a benefit to people who are feeling unsure of themselves and wanting to progress through life without fear of being inadequate."
Sebastian, age 10 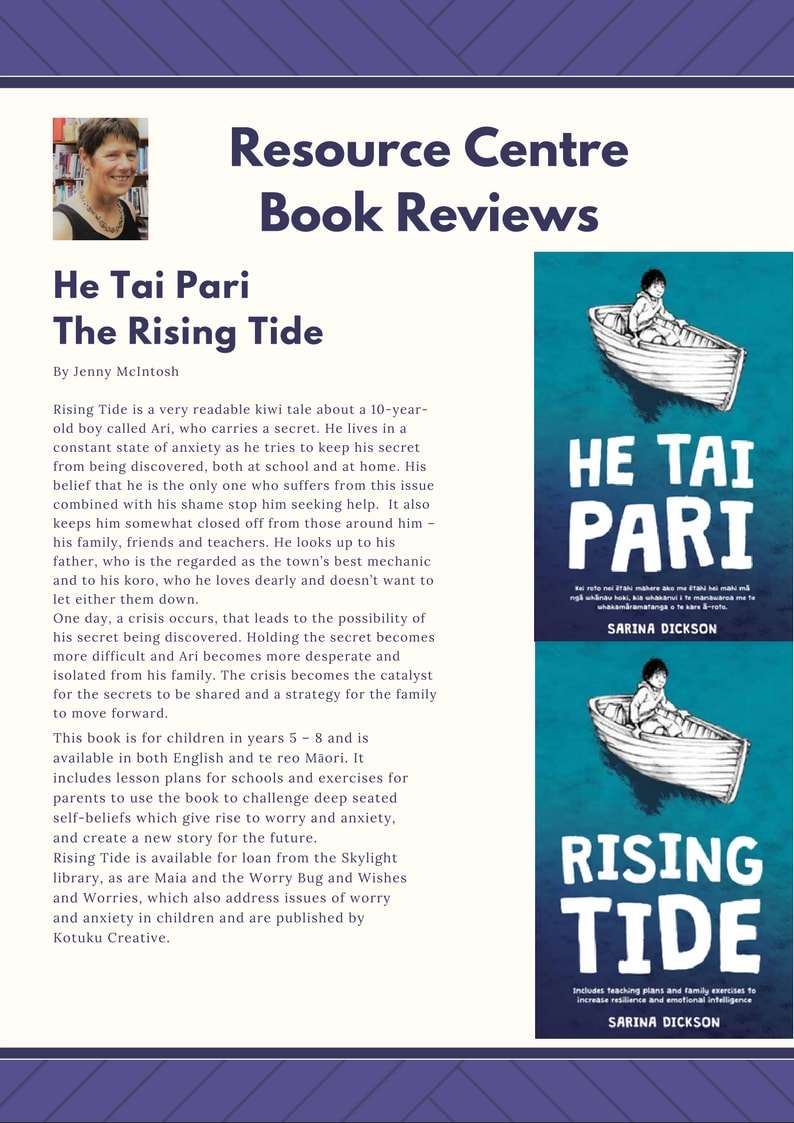 Rising Tide and He Tai Pari were voiced and produced by Sampson Karst, Director of Manu Media.